When the 90’s era of boyfriend was over, many fresh young boys have tried to be the idols of Western’s bubblegum pop music. The most recent and most popular UK’s boyband called ‘One Direction’ is a big thing. The boyband consists of five young English singers, but one of the most attractive is, of course, Zayn Malik. His Middle Eastern face and sexy voice have got all the girls around the world scream and shout. Even though he’s only 20 years old now, his cute yet bad-boy image has made all fans melted whenever they see him. 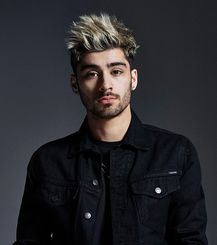 Zayn Malik is also known for his numerous tattoos. This lovely singer has a total of nine tattoos on his body so far. The first tattoo that he got is ‘Walter’ in Arabic, located on his chest. Malik’s second tattoo is the symbol of Yin and Yang on his left wrist. The third tattoo is located on his forearm, a symbol of crossed fingers. The fourth one is a deck of cards on his rib cage. Zayn’s fifth tattoo is a jigsaw puzzle, which is so small and almost invisible. The sixth tattoo is the ‘born lucky’ words in Chinese. His seventh tattoo is a feather, or New Zealand’s fern. His latest tattoos are the ‘be true to who you are’ in Arabic and a symbol of microphone.

His tattoos are definitely Zayn Malik’s Favorite Things. Each of his tattoos has a special meaning. We may see another incoming tatoo in the future because he really loves getting it.

Seeing Mila Kunis without Makeup. Is it possible?

Is It Possible To See Katy Perry without Makeup?

Nicky Minaj : Compare Her with and without Makeup

What are Alex Pettyfer’s Favorite Movies?